Is that a mixer, or a meringue? 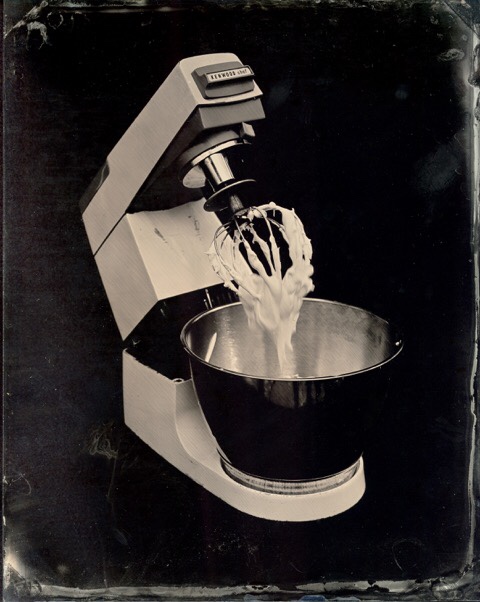 My husband, a photographer who specialises in antiquarian photographic processes, decided to have a go at teaching me to a wet plate collodion image. He started by asking me to have a think about what I’d like to shoot, and then rejected all my suggestions on the basis that they weren’t ‘still’ enough. ‘Pick something that can’t move. Ideally, a heavy object. How about your Kenwood mixer?’

Because what girl doesn’t want a photograph of her kitchen mixer, right?

But the more I thought about this, the more I realised he’d actually made a very good call. Apart from our wedding rings, this mixer is probably the most totemic object we own.

It was bought by my mother-in-law some sixty years ago with money they had received as a wedding present. Which means, so far, so nostalgic-photographic-processes appropriate. Even more so, when you stop to think that she bought it duty free in Aden, while en route to Ceylon where my father-in-law was working some sixty years ago, and that the camera this image was made with is Indian in origin, having originally been used as field camera during the British Raj.

Around about the time we were married, someone gave us a copy of Nigella Lawson’s How to Eat, and the first of a thousand pavlova’s was launched from this mixer – not unlike the one seen here. In fact, I’ve made so many pavlovas over the years for family and friends that this poor old machine can probably now do it without me (but not I without it). Although I had no idea that turning to page 373 (my copy now falls open there) would end up being such a recurring event in my life, it is now almost a tradition. Certainly, I get more requests for this than for anything else I’ve ever served.

One of the calming thing about traditions is that they are as much about our pasts as they are about the present. So now, as my latest playlist blares, and I begin separating the eggs, I can’t help thinking of the stand-out pavlovas of yore. By this, obviously, I don’t mean the actual cakes. Let’s face it, if you’ve seen one pavlova, you’ve kind of seen them all. But the occasions linger.

An early one was a command performance for my father-in-law (the mixer must still have been ‘theirs’ then, because I know I made it in their kitchen in Glasgow). We were at the table when my eldest brother-in-law stopped by unexpectedly. His father was particularly delighted by this, and insisted he sit down and try some of the ‘special cake’ I had made. One of the reasons this really sticks in my mind is becasue it is the earliest memory I have of realising my father-in-law was ‘at it’, as they say in Glasgow. I sliced the pavlova, and served it up, not knowing quite what my part in this trap was, but already enjoying it just the same. Big Brother loved the pav and, as he was wolfing the second piece, he repeatedly assured me I’d be most welcome to make it again any time (- although after so many years, he may now well have revised this early view to oh-good-Lord-not-another-fucking-pavlova). When he’d finished, his father explained to me that it was lovely to see him enjoying a pudding, because he didn’t often get to eat them.

Oh yes. Very, very allergic. And we’re not talking just your basic entry-level allergy here. Seemingly, in this case, the situation could potentially be fatal.

‘So, it’s just as well we thought to warn you now,’ my father-in-law said with a knowing wink.

With Forever Summer Nigella raised the humble pav to Himalayan heights by adding both chocolate and raspberries. The first time I served this, we were also sat around my in-law’s kitchen table – only with it pulled out to its full width, because their middle son had come for dinner with his twin sons (then aged 4). It’s fair to say they loved the fruits of the mixer as much as their uncle had. More so even, for instead of staying seated while asking for more, one of the boys, noticing his father’s back was turned, climbed onto the table and crawled towards me stage-whispering, ‘Auntie Melanie, give me more of that dried out brown stuff.’

The meringue seen here didn’t end up being chocolate, but stayed plain old vanilla. But it is the second one I’d made in less than a week. Last Monday was Gordon’s birthday, and on that occasion Key Lime Pavlova seemed right somehow. But, if you are as into your antiquarian photographic processes as he is (and frankly, if not, why are you even still reading this?) then I suppose you could be forgiven for thinking we’d been whipping up a batch of albumen before making a bottle of that gunky yellow mixture necessary for some antiquarian printing processes. But no.

For that, Gordon has his own mixer. Whereas this mixer here? Well, it’s a piece of domestic equipment, and everyone knows that domestic equipment – particularly kitchen equipment – is NOT intended for dragging out into the shed and using on the same workbench where you mix the cyanide and ether smoothies.