TRUE STORY: How eBay became a front line in our marriage. 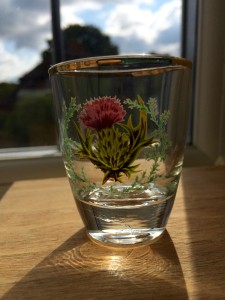 It’s my husband’s latest eBay victory. A genuine thistle (decal) shot glass. One of a set of four (although he only bought three of them, because the 4th one was listed as cracked and so during the comms part of the excitement, he told the sellers they could just keep the broken one.)

But I console myself that one or two runs through ‘his’ dishwasher, and these shot glasses won’t be nearly as thistley as they are now. And it is very sweet that the reason he decided to seek these out to bid on was that the shot glass he uses to make me martinis with (he does make the best martinis ever…) went into the dishwasher and never came back out again.

In the interests of balance, I try to think of all the positives about shopping on eBay.  For one thing, by buying this stuff up and shoving it our cupboards and under the beds, my husband is doing his bit to help reduce the growing problem of landfills in the English countryside.  Then there is reducing carbon emissions and underwriting the Post Office to consider.  Because I am quite sure the main reason most of this stuff appears on eBay is that the sellers live nearer to the post office than they do the tip.

Of course, out there somewhere today there is another husband and wife discussing these very same shot glasses over their tea and toast. They may even be holding the broken one up to the light and reminiscing about how it got smashed. He is saying I TOLD YOU SO, and she is having to admit she was wrong to say he had lost his mind if he thought anyone was going to bid on (a) a set of three shot glasses, and (b) particularly these ones. Oh, how he must have laughed when he ran to tell her she was wrong, that someone out there not only was wiring them a picture of the queen in exchange for these shot glasses – but they even get to keep the broken one!

Meanwhile, back at our house, I can’t help wondering what kind of shots these glasses were designed for? My husband suggested whisky, but does anyone ever do whisky shots? Drambuie maybe? Or Columba Cream?

As I finish typing this, Gordon walks in and asks what I’m up to.  I read him the post, and he laughs, before telling me I’ve left out the most important detail.

ME:   What detail is that?
HIM:   I’m currently the top bidder on a set of three Buffy shot glasses!

As luck would have it, he ‘won’ these as well – and for just south of double the price of the sticky thistles.  Sadly, the deal then fell through when the seller was unable to actually locate said glasses so they could be despatched. Ha! For once *I* won at eBay.  I can only assume their cupboards must look like ours…

Have you ever bought anything regrettable on eBay?  Please write and tell me more. I’d love to know it’s not just us…

Scenes From a Marriage, Uncategorized