Yesterday, I took my first ever gas mask photo… 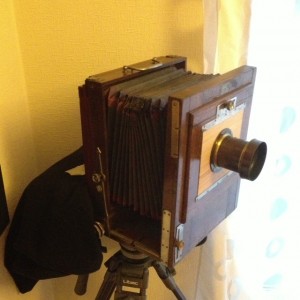 If you’ve been reading this blog, then you will know that one of my goals for 2013 is to try and think a little differently about creative expression.  As part of this process, I have managed to be become the embedded writer in an astonishing project involving more than that 100+ wet plate photographers from more than 25 countries.  It’s called ‘The Mask Series‘ and the idea is quite simple.  Everyone involved takes one image, using a wet plate camera like the one you see here.  In other words, no film. Instead, you mix up the chemicals needed to make your chosen surface (glass, tin, aluminium) photosensitive, and then, provided you haven’t blown yourself up yet, you take a photo that has a vintage M10 Czech Gas Mask in it.  (This does actually make a lot more sense if you look at the blog devoted to the project.)

Since I am writing so much about this project now, I decided it was about time I took a gas mask image of my own.  The only problem is that I can’t take a wet plate collodion photograph.  Or rather, I suppose could, by cheating a bit.  I’m sure, if I asked him nicely, my husband would mix the chemicals, and set up the plates, and help me work out all the lighting issues, and the exposure time.  And, since I am on crutches, I’ll bet he’d even do all the esoteric running back and forth in a butcher’s aprons and CSI gloves to the ‘darkroom’ (aka, our downstairs loo).

I know he would do that for me.  But it just wouldn’t feel right somehow. Because even in the short time I have spent writing about the wet plate collodion community, I have developed a very healthy respect for the tremendous skill levels involved.  So deep down, I knew that taking short-cuts here just wouldn’t be right.  But since I am writing so much about the images that others are taking, I felt I should at least think about what sort of image I would take if I was in possession of the necessary skills.

I was surprised to find it wasn’t something I needed to think about for very long. If anything, it felt as though the answer been ready the whole time, lying in wait for the question.  If I am going to ‘make’ an image, one that is consciously chosen as an artistic expression, then it has to be of my husband.

This was an epiphany of sorts.  Exactly the sort of thing I was hoping to discover when I decided to try thinking more consciously about creativity.  Who knew the visual-me and the scribbling-me would be preoccupied with completely different subjects?

In my fiction, I am mainly drawn to loss, sorrow, and the ways in which we do, or don’t, recover from violent incidents in our lives.   So it’s perhaps not surprising that my husband doesn’t tend to feature very heavily (or, indeed, at all) in what I write.   And yet if I’m going to be staring down the barrel of a camera, then he is instinctively what I want to take a closer look at.  (In fact, to my horror, I’m beginning to wonder if, as a photographer, I might actually border on the whimsical.)

Why should the medium have such a transformational impact on, not just the creative impulse, but also the tone of the output?  I’ve got a call into Messrs. Freud und Jung about this, and will update you if I hear more…

Meanwhile back in my Christopher Isherwood moment, I started thinking about how I would reconcile these two radically different ideas [Gordon + Gas Mask].  The first big problem was that I don’t want to think about Gordon ever needing a gas mask.  His breathing is already fragile enough, because of asthma, and there have been too many times when I have been awake in the night listening to this rasping vulnerability, and trying banish thoughts of how quickly it could all go wrong.  In these moments I think of the staggering poem by Margaret Atwood  Variations on the Word “Sleep”.

By now I was starting to feel a bit defeated about conveying all of this to the viewer in one image.  Plus, even as I prepare to tell Gordon about this idea, which I am quietly confident he is going to hate, in the back of my mind there is another angsty question brewing.  Do I really want to be the first one to bring a camera into our bedroom?

So, both emotionally and creatively, there was a fair bit going on before I even got to the part about not being able to work the camera.

The more I write about this, the more the very act of doing so, i.e. writing about my planned image, feeling the need to justify it, and/or apologise in advance for its shortcomings, strikes me as still more evidence that I am not one of nature’s born conceptual artists.  For if there is one thing I have noticed about photographers, it’s that they tend not to bang on endlessly about their images unless there are writers standing around pestering them for details.  So this entire exercise is starting to feel like big flashing clue that when I do actually take the bloody shot, the result won’t be worth its thousand words.

A little while later…

You’ll be relieved to hear, it’s done now. My ‘what might have been’ attempt at contributing to the Mask Series. Unapologetically taken with my iPhone.  (Although, Gordo has promised there will be a Collodion Bastardised version coming soon…)

Here it is…a photo of my husband, pretending to sleep with a vintage Czech gas mask on.

I call it, ‘Gordo, pretending to sleep while wearing a vintage Czech gas mask‘.