Portrait of the Artist as a household menace…

As I type this, my husband is standing in a doorway, waiting for the rain to stop so his first wet plate shoot can start.

Being married to a photographer, I am well used to things going missing from the house without warning. Recently I went to turn on the World At One and it took me several minutes to work out why there was no sound. MY speakers, from MY kitchen, had gone down to the village hall, which my husband had hired for the day for an indoor shoot. Annoying, but hey, the shots were great! 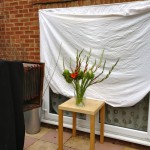 But this wet plate obsession is taking things to a new level, and the first shot still hasn’t been taken yet. Although it’s about to, any minute…if the rain would only stop and our friend Elizabeth would hurry up and get here to watch.

Not only are the chemicals involved described by everyone who mentions it as ‘lethal’. Ether, arsenic, silver nitrate, collodium, all fluids you can’t take on board an aircraft anymore, because of the way they can so easily, even accidentally, be made to rhyme with BOOM! 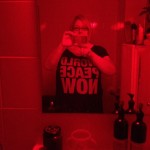 Meanwhile, the flowers I bought for the front hall are now outside on the patio, and our downstairs shower room has bin liners and bits of red plastic for curtains. The lightbulbs in the downstairs fittings are now red. What will the neighbours think? They won’t even blink. They’ve known my strange husband for years.

p.s. The photographer has just assured me there is no arsenic involved in this process whatsoever. It’s cyanide.