where is the closest casino http://melanielgarrett.com/sands-casino-outlets/

On having my portrait taken by Tony Richards

I get my picture taken a lot. On a bad day, this can mean dozens of times.  The reason?  Usually, it’s because I am ‘there’; standing around on the set of a shoot my husband is setting up, and therefore a sitting duck for any other photographer who happens to have their camera in hand and wants to just ‘check the light’ and what it is doing to skin tones.
Until recently (like ten days ago) I absolutely hated having my picture taken.  Then, last Sunday, I was standing around on an outside location shoot at which a group of photographers had turned up to help (it’s has been my experience that photographers travel in packs, or herds even).  Elizabeth Molineux was on hand, ‘testing’ a camera she had borrowed for a particular job she was doing later in the week.  This ‘testing’ involved picking people off from the herd one-by-one, and holding her lens a few millimetres from their faces.

I heard Elizabeth clicking, so close it was like she had climbed into my ear, and turned to look at her down the barrel of the lens.  So, not just a close up, but an extreme close up, AND she was using that Kalashnikov setting that takes 200 frames per second.  Ordinarily, this sort of thing really winds me up.  But looking at her, I had a sort of epiphany, and instead of doing my usual thing of cringing and thinking, can you not just give it a rest with that bloody thing, this time I just stood still and watched Elizabeth.  I watched Elizabeth doing her thing and made a critical leap.  It wasn’t about me, it was about Elizabeth.  She was doing her thing, and I just happened to be in her light.

After a moment or two, her head popped out from behind the camera and she said, ‘Wow!  You’re really amenable today.’  I knew then that something really important had changed, that I had just experienced my own little moment décisif, if you will. 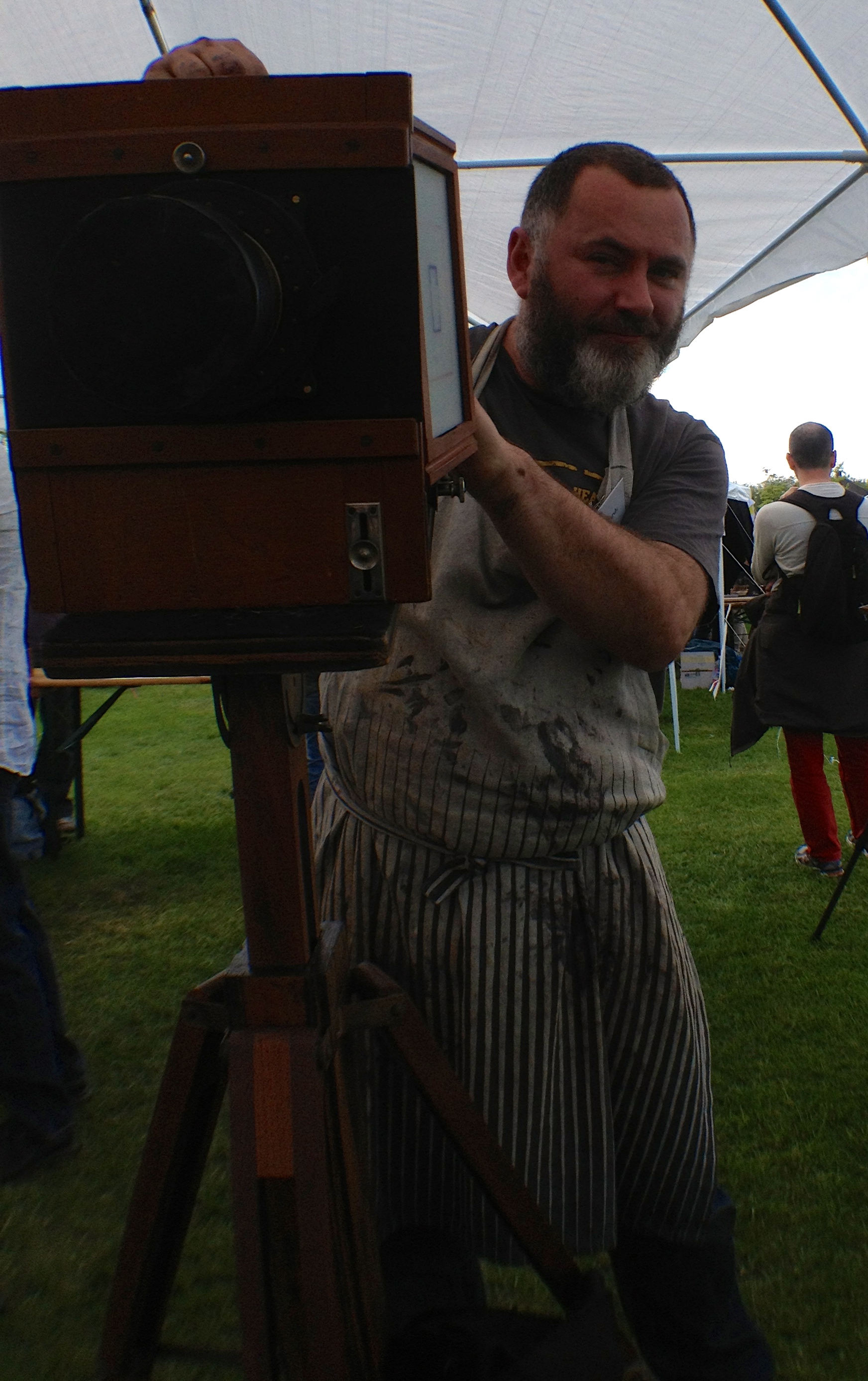 Fortunately, I remembered to pack this Whole New Mindset when we headed off to Veldhoven in the Netherlands for the European Collodion Weekend.  Because there, I had the great pleasure (yes, pleasure!) of having my photo taken by Tony Richards, a wet-plate photographer from the North of England, who excels at portraits, and was exhibiting his work at Veldhoven. This time, it was not a question of just happening to be standing in the wrong place when he wanted to check the light, but rather, actually stopping what we were doing and sitting down in his pop-up studio so he could take the shot.

Although I had never met Tony in person until this weekend, he is someone I have collaborated with online.  So it was lovely to finally have the time to just sit still and watch him at work.  As he prepared the plate to slot into his magnificent camera with its Petzval lens, it suddenly hit me. This is the real portrait:  The way he takes such enormous care over all the myriad details which go into a making a unique wet-plate image. Except, through some trick of the light, instead of seeing Tony on the glass at the end, it has ended up looking more like me.  Or perhaps, it is Tony’s version of me.  The ‘me’ he coaxed onto the glass by telling me where to look, and what to think of while the lens cap was off (sorry, since this is a family site, I can’t share tell you what it was…)

Afterwards,Tony asked if I wanted to come into the tent he was using as a mobile dark room to see the plate come to life. Obviously, I jumped at the chance and – buoyed up by the short-film I had made the previous day in another photographer’s dark-tent – I asked if I could film the plate 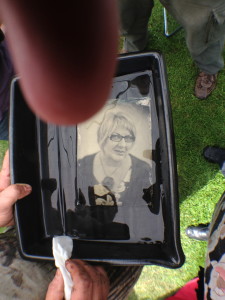 appearing in  the developing tray.  He said yes, and zipped the flap of the tent shut.  Fumbling around in the pitch dark, I turned on the video camera and a big light came on. The sort of light you might use if you wanted to melt the world.  Anyway, we both jumped and ran around the tent panicking a bit, and then I managed to get it switched off again.  As you can imagine, I felt sick with embarrassment at having just ruined his plate.  But Tony just laughed and told me if it didn’t work, we’d do it again.  But do you know what?  Despite my best efforts to destroy it, the plate worked.   So here you have it.  A portrait of someone who was lucky enough to get the best seat in the house for watching Tony Richards at work.
(In the image on the left here, you can see Tony showing members of the public who attended the European Collodion Weekend how he gently uses cotton wool on the plate to simply daub away any unwanted artefacts from the wet-plate collodion process.)